Yes, it's only 2017, but many candidates are already stepping forward for races in 2018.

In some cases, it's out of necessity - the races are so involved that an effective campaign needs time to sufficiently get up to speed (i.e. - fundraise).

In other cases, it about trying to clear the field (i.e. - minimize viable opposition).

In a few cases, it's about getting in some practice early on so that when campaign season gets fully up to speed, they'll be in full throat when they bay at the moon (we *are* talking about AZ, after all :) ).

Things will change before the cycle is over.  Some of the current candidates will discontinue their candidacies, and other people will jump in.

Also, races for seats in the legislature are still in almost complete flux; those will be covered at a later date.  This post will be all about races for statewide offices and seats in Congress.

On to the meat of this post (where a city is included - "Candidate X of city ABC", the city is based on the committee address)...

In CD9, seat currently held by Democrat (in name, anyway) Kyrsten Sinema, Irina Baroness von Behr of Tempe has filed for the race for the Republican nomination.  She was last seen running for a seat on the Tempe City Council, where she finished a distant last.

Talia Fuentes of Tempe has filed for the race for the Democratic nomination in CD9.  Her filing with the FEC specifically states that she the seat in CD9, but her website only discusses CD5.

Dave Giles of Gilbert has filed for another run at the Republican nomination in CD9.

Edna San Miguel of Tucson has filed for a run at the R nomination in CD3 (currently held by *D Raul Grijalva).
*Edited; a reader at Blog for Arizona spotted an error on my part.  Originally, I stated that the seat was held by Republican Paul Gosar.  I regret the error and thank Mr. Cizek for noticing and bringing it to my attention


Brianna Westbrook of Sun City has filed for a run at the D nomination in CD8 (currently held by R Trent Franks).

Noah Dyer of Phoenix has filed IRS paperwork and AZSOS paperwork for a run at the Democratic nomination for governor.

Pat Quinn of Tucson has filed IRS paperwork for an independent run for US Senate.

Stacie Banks of Phoenix has filed for an independent run for Superintendent of Public Instruction.

Tom Forese, currently a member of the Arizona Corporation Commission, has filed for a run for the R nomination for State Treasurer.

Randy Grivel of Glendale has filed for a run for the R nomination for Arizona Corporation Commission.

Katie Hobbs of Phoenix, currently the Democratic leader in the Arizona State Senate (and my representative there) is running for the D nomination for AZ Secretary of State.

Kathy Hoffman of Glendale has filed for a run at the D nomination for Superintendent of Public Instruction.

Tracy Livingston of Peoria, wife of wingnut state legislator David Livingston, has filed for the R nomination for Superintendent of Public Instruction.

Greg Stanton, currently the mayor of Phoenix, has filed for a run at the D nomination for AZ Secretary of State.  Caveat:  The committee to do that may just be a "placeholder" committee.

Stu Starky of Phoenix has filed for a run at the Green Party nomination for Superintendent of Public Instruction.

Former state senator Kelli Ward is mounting a campaign to oppose Jeff Flake in the R primary for US Senate.


Rumors, or at least stuff that has been said but can't yet be confirmed by agency filings:


Rumors have current AZ Treasurer Jeff Dewit considering a run against Flake for the R nomination for US Senate.  While he has not officially stated his plans for 2018, he has stated that he will not be running for reelection as state treasurer.  If the US Senate thing doesn't work out, he may part of the Trump administration's bench, getting called in to fill a vacancy when turnover there inevitably occurs.
Posted by cpmaz at 3/11/2017 10:05:00 PM 11 comments:

Fasten Your Seatbelts, The Ride Is About To Get Bumpy - AZ Budget Time Is Nigh

Traditionally, a session of the Arizona legislature is suppose to be 100 days long.

It's not a requirement, in terms of the law or legislative rules, but it's definitely seen as something to strive for. During most years, the 100th day of a session falls in mid- to late- April.

The one specific duty that the lege has is to formulate a budget for the state.

Of course, being the lege, their focus is on doing many things *to* the state before doing anything *for* the state...and they use that budget that is supposed to be for the state as a vehicle for doing things to the state, but I digress...

So naturally, they wait until they are well more than halfway to the hundred day goal before even considering a budget.

From Mary Jo Pitzl of the Arizona Republic - 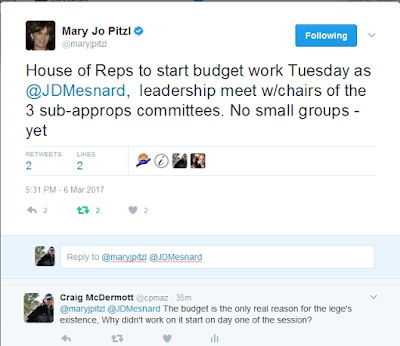 They lege has "improved" its website, making it considerably more user-unfriendly.  As such, the format of this post may change over time as I figure out the best way to utilize the new website.

All committees meetings and agendas are subject to change without notice, and frequently do.  If you plan to travel to the Capitol to observe or weigh in on the consideration of a particular measure, check with the lege ahead of time to confirm that the meeting that you are interested in is still on schedule and your item(s) of interest is still on the agenda for that meeting.

When the phrase "looks harmless" is used, it only means that any harm to AZ that would be wrought by the bills on the agenda isn't apparent to me as of this writing.  However, if you notice any nuggets of ugly that I miss, please leave a comment that makes me and other readers aware of the situation.

Because of the MLK holiday, many of the committees that meet on Mondays will not meet this week or will meet on days other than Monday.

-Appropriations Subcommittee on Education - Wednesday, 9 a.m., HHR4.  Budget presentations from Community Colleges, the Arizona School for the Deaf and Blind, and the State Board of Education

Energy, Environment, and Natural Resources - Tuesday, 2 p.m., HHR3.  Some bills from Rusty Bowers:  HB2093, that looks "sneaky bad", HB2095, compelling the granting of perpetual rights-of-way across public lands to private property, and HB2131, relating to emissions standards.  I don't really understand the impact of it, but since it is from Bowers, I assume it is bad.

Federalism, Property Rights and Public Policy - Tuesday, 2 p.m., HHR4.  A couple of "tin foil hat" bills - HB2097, relating to the legislature overriding any federal executive order, regulation, etc. that it considers to be "commandeering"; HCR2006, a call for an Article V convention that would change the US Constitution in a myriad of ways, all being conservative "cause celebres" (legislative election of US Senators, voter ID laws, term limits for members of Congress and members of the Supreme Court, etc.).

Government - Thursday, 9 a.m., HHR1.  I don't understand all of the bills, but one to watch: HB2026, an "omnibus" bill of changes proposed by the Arizona Secretary of State,  Traditionally, omnibus bills are supposed to contained only "non-controversial" changes, but these can be havens for mischief when not carefully examined.

Judiciary and Public Safety - Wednesday, 2 p.m., HHR4. On the agenda: HB2022, creating an exemption to laws prohibiting discharge of firearms within the borders of municipalities for shooting rats and snakes.  Also: HB2238, a bill making sex trafficking of a minor a class 2 felony (this one actually looks like a good bill).

Local and International Affairs - Wednesday, 9 a.m., HHR5.  On the agenda: HB2013, the annual attempt to cut into newspaper revenue by weakening rules regarding publication of public notices.

Education - Thursday, 9 a.m., SHR1.  On the agenda: Eight bills, all looking to undermine public education, and each in their own special way.

Government - Wednesday, 2 p.m., SHR109. On the agenda: SB1021, a hate-filled measure that attacks both Latino people and local control (it's from Kavanagh, who isn't afraid to multi-task) creating a list of specific rules regarding municipally-issued ID cards; SB1060, moving resolution of homeowner's association disputes to the state real estate department.

Health and Human Services - Wednesday, 2 p.m., SHR1.  Looks harmless so far (on the other hand, one of the bills is from Kavanagh, so take that characterization with a healthy dose of skepticism).

Judiciary - Thursday, 9 a.m., SHR109.  On the agenda: SB1045, changing the legal definition of "marijuana"Thursday, 9 a.m., SHR1; SCM1002, a love letter to Congress urging it to split the US 9th Circuit Court of Appeals, putting AZ in a more conservative circuit.  There are other bad bills on this agenda; my guess is that this will be a committee to keep an eye on for the entire legislative session.

Transportation and Technology - Tuesday, 2 p.m., SHR1.  Looks harmless so far (on the other hand, the one bill on the agenda is from Kavanagh, so take that characterization with a healthy dose of skepticism).
1
R1Rules - Tuesday, 11:30 a.m. or upon the adjournment of the meeting of Joint Appropriation, Senate Caucus Room 1.  Two bills that were assigned directly to the Rules Committee.


No floor calendars for the House or Senate have been posted as yet.

The Capitol Events calendar is here.  It will take some work to identify the "outside" events at the Capitol, due to the changes in lege's website.

cpmaz
My name is Craig. I have lived in AZ for 18 years or so. Transplant from MA. Waiting...hoping for more to move here so the Dems can retake the Lege. Currently reading Capital in the Twenty-First Century by Thomas Piketty.. Got news tips or leads? Email them to cpmaz@yahoo.com. Note: Spam comments will be deleted.