Just a few quick hits on some names in the news, and in the interest of being fair, some of the people listed will be Democrats (yes, there are Democrats who do things that deserve criticism and even ouster from office)...

I'm all for forgiving someone for a minor transgression, a character flaw, or something similar that doesn't impact an elected's ability to do his (or her) job.

However, Filner's bad behavior isn't just part of his personal life.  It is part and parcel of the way that he does his job.

And descriptions of the bad behavior legitimately include the word "victims".

It's past time for him to step down.

Not for cheating on his wife; that's part of his personal life.

What isn't part of his personal life is his penchant for giving his girlfriends highly-paid jobs funded by the taxpayers.

His desire to get laid doesn't give him the right to screw over the people of Arizona.


...Democrat Anthony Weiner, candidate for mayor in New York City, still is in the habit of Tweeting pics of himself and his reproductive organ to women he has never met (already went for "crude" in this post; time for "clinical" :) ).  Even after leaving Congress in disgrace for doing the same thing.

He shouldn't drop out of the race; the voters of NYC should, electorally speaking, hand him his ass on a platter (which they seem to be set to do).

Simply having to leave office amid scandal didn't help him learn the "don't act like a moron!" lesson, perhaps an outright rejection by the voters will bring it home to Weiner.


...Republican Crystal Nuttle, candidate for the LD29 AZ State Senate seat, was arrested on custodial interference charges for helping another woman remove a child from CPS custody.  Instead of exhibiting penitence for her (alleged) crime, she's exhibiting ego and doubling down on it.  She is insisting that her actions were "justified".

I'm guessing that she isn't going to drop out of the race (based on her "it was justified" position), but it should make next year's race interesting to cover.


...Republican Bob Thorpe, LD6 State Representative, posted some bigoted tweets earlier this week, and when called on it, did not respond by apologizing or even simply "clarifying" his tweets.  Nope, he just deleted them and blocked some reporters from viewing his Twitter feed.

I expect that I will soon join the reporters on Thorpe's social media version of an enemies list for this, but here are the tweets in question (posted Monday) -

I do think his tweets are bigoted, but you decide for yourself.

He was called out for the tweets today by a couple of D members of the AZ House, Reps. Martin Quezada and Mark Cardenas.  The conversations are short, perhaps due to the deletion of the original tweets.  However, they make more sense when you look at the above picture first. 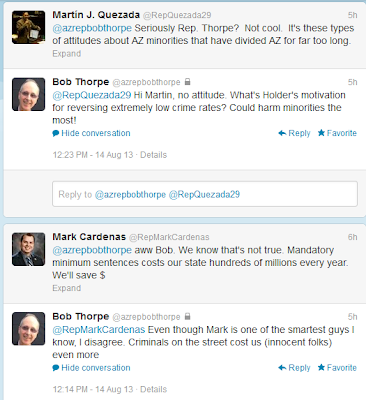 To be fair to Thorpe, he doesn't confine his bigotry to ethnic and racial minorities; he advocates shooting environmentalists, too.

And given his history, don't expect Thorpe to change his attitudes or even to withdraw from public life.