For those of you who thought the mayor's race in Tempe was the end of campaign season...oh, who am I kidding?  If you're reading this blog, you already know better.  :)

The Community Council of Scottsdale held a forum for the three candidates for mayor in Scottsdale on Thursday evening in the Granite Reef Senior Center.

The candidates are incumbent Jim Lane and challengers Drew Bernhardt and John Washington.

I don't have the time (or the notes) for a full write up, but I do have one major observation about politics in Scottsdale -

The more things change, the more they stay the same.

- All three candidates were asked their positions on the possibility of the construction of a light rail line in Scottsdale.

All three candidates oppose the idea.

All three candidate ignored the fact that the possibility of light rail in Scottsdale was nixed nearly a decade ago.

Edit on 5/18 - Thanks to candidate John Washington to spotting the error in the above statement (see comment below).  One candidate, Jim Lane, did say that the light rail issue has already been decided.  The point is still valid though - light rail in Scottsdale is dead and has been dead for a decade, but it is still being fought over, to the detriment of attention to issues that Scottsdale actually faces.

- Also brought up at the forum:  firing the city manager.  It must be an even-numbered year thing.  For the record:  Bernhardt and Washington support the idea, Lane demurred, citing confidentiality concerns or something similar.  The upshot:  Scottsdale will have an opening in it city manager's office within a few months.  Interested applicants should adjust their salary requirements based on the expected brief tenure (in other words, make 'em pay through the nose.  It pains me as a taxpayer to say that, but it's the way it has to be.)

A few pics from the forum - 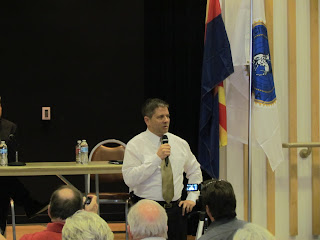 Candidate John Washington introducing himself to the audience 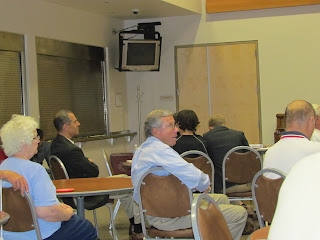 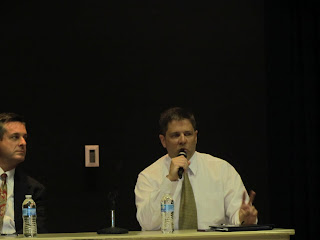 Washington making a point.  Bernhardt is on the left side of the pic. 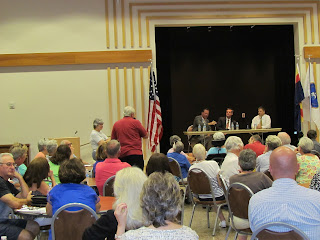 An audience member asks a question.  On stage, from left to right:  Lane, Bernhardt, Washington. 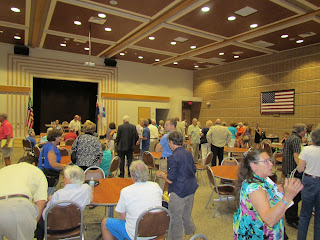 The audience breaking up after the forum 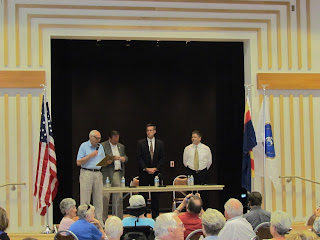 The three candidates being introduced by Jerry, the head of the Community Council of Scottsdale.
Posted by Craig at 5/17/2012 10:13:00 PM

Craig, thanks for your coverage of this forum.

For the record (pending review of the video), Lane said the same thing you said...that light rail was decided a long time ago. He did NOT commit to stopping it.

Also for the record, I support Bernhardt's offer to stop it with his body. Air Force always lets the Marines storm the beach!

Thanks for the correction re: Lane and light rail. I'll update the post.