John Washington for mayor of Scottsdale


Even before the mayoral candidate forum held on Thursday night, I was leaning toward supporting John Washington for Mayor of Scottsdale.

One candidate, Jim Lane, is the incumbent.  He has a track record of kowtowing to lobbying group the Goldwater Institute to the point of ignoring neighborhood interests and desires in favor of implementing GI's preferred policies.

Another candidate, Drew Bernhardt, seems to be less about substance and more about trying to tap the vein of nostalgia that runs deep in a certain segment of Scottsdale's population.

To be fair, that tactic may have been effective with Thursday's audience, which was skewed heavily toward the Medicare/Social Security-eligible, "why can't Scottsdale be like it was when it had 2000 people, 200 hitching rails and 2 paved roads?" demographic.

However, it was grating to hear him constantly refer to Scottsdale as a "town".

In fact, Scottsdale hasn't been a town in decades.  According to the City's own website, by 1970, the city's population had reached nearly 68,000, the size of a small city, but a city nonetheless.

According to the last federal census, it has more than 217,000 residents.

That's not a small town, that's a small big city.

In short, Bernhardt is a north Scottsdale newbie who is hoping that the voters south of Shea Boulevard will vote for him while ignoring the fact that he offers them nothing beyond nostalgic but empty rhetoric.

On the other hand, John Washington has cut his political teeth by working at the grassroots level for the protection and betterment of Scottsdale's neighborhoods and Scottsdale as a whole.

His love of Scottsdale isn't a revelation timed for campaign season.  I've been writing this blog for more than six years.  I met him at the first community meeting that I covered in 2006, and he was active in the community long before that.

Then as now, he talks *to* (and listens to) and works *with* people, in contrast to many electeds/candidates, who talk *at* and work *around* people.  Even when disagreeing with people, he is civil and genuinely friendly; he doesn't turn disagreement into personal animosity. 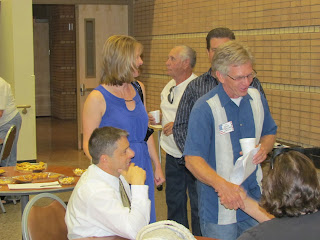 
Unlike say, the current mayor, who had Washington removed from Scottsdale's Airport Advisory Commission when Washington expressed concerns, and continued expressions of concern even after being told to "sit down and shut up", over the mayor's (and the city council's) repeated approvals of high-density residential projects that encroach upon Scottsdale's airport.

In terms of personal political ideology, he's more of libertarian than anything else (not sure of his actual registration however - he may be Libertarian, Republican, or Independent), but local politics is practical politics.  It's about getting good things done for the city and its residents, something that Lane has forgotten (if he ever knew it in the first place) and that Bernhardt doesn't seem to even care to know.

To be clear, when (OK, *if* :) ) he becomes mayor, many of Washington's positions will drive me nuts (libertarian that he is :) ).

However, while we may disagree on how best to protect and improve Scottsdale, we agree on the ultimate objective.

That alone makes John Washington the best candidate to be the next mayor of Scottsdale.

And when you add in the genuine friendliness and deep affection for Scottsdale?

Washington becames the best candidate to be the next great mayor of Scottsdale.

If you're interested, information on helping Washington get on the ballot, donating to his campaign, or just contacting him can be found here.