Thursday evening, well over 200 people gathered at the Granite Reef Senior Citizen Center in Scottsdale for one of the hearings held by the Arizona Independent Redistricting Commission (AIRC).

The room was so crowded that building staff had to put out dozens of extra chairs and there were still people stand around the sides of the room and outside where they still listen to the goings-on.

A couple of us made jokes that the Rs in the legislature weren't going to have time to completely shut down the meeting because the fire department would beat them to it.

However, the mayor of Scottsdale, Jim Lane, was in the audience, so the Scottsdale Fire Department was nowhere around. 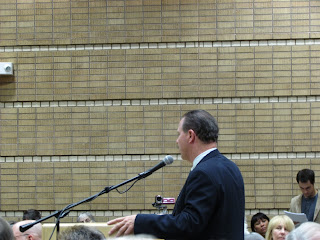 Steve at Arizona Eagletarian has a full write-up here, but I have a few observations about the meeting, the R talking points (and the early part of the hearing was an R propaganda-fest) -

- Commissioner Rick Stertz, the commissioner present at the hearing (and Russell Pearce's appointee), gave preference to elected officials, letting them speak first.  Apparently, that has been the practice all along, even before the lege moved to usurp the "independence" in the independent redistricting process.

However, the average citizen had only two minutes to speak, where the electeds spoke for as long as they wanted to.

Apparently in Arizona, not only do alleged public servants not understand the concept of *public" service, they don't even acknowledge (or maybe simply don't understand) the concepts of basic courtesy, as in "hit the high points, submit the rest in writing, and get out of the way - a lot of other people have the right to be heard too".

- Republican State Rep. John Kavanagh was one of the electeds who testified at the hearing.  In the interests of brevity, I won't rehash all of it (it was itself a rehash of the report generated by the GOPers kangaroo court...errr..."Joint Committee On Redistricting"), but suffice to say if Kavanagh or any of his associates choose to stand up and repeat that BS in court, they should bring a good defense attorney with them (hint: not Lisa Hauser; her involvement with this mess may cause her to need a defense attorney, but it doesn't make her one).

And they should bring a good toothbrush with them, in case the good defense attorney just isn't good enough and the judge is one that takes a dim view of perjury.  Ya just don't know where that prison-issued toothbrush has been...

- Other than the generic R talking points excoriating the AIRC for failing to kiss R butt, there was a pattern to specific suggestions that the Rs made to the AIRC.

I only *wish* I was making that part up, but alas, my imagination just isn't that creative.

Anyway, the mentality exhibited seemed to be less that district boundaries are lines on a map and more that they walls across streets.

Not the truth, but the truth and intellectual honesty was in short supply during the early part of the meeting.

One thing I'd say to the woman who conflated shopping and district lines if I could - the merchants of north Scottsdale don't care about what district (or state, or country) their customers are from, so long as they leave a lot of money here when they visit.

The other consistent map-specific talking point was that the AIRC should change the lines to include south Scottsdale in the same districts as north Scottsdale.

I haven't heard such professions of solidarity with south Scottsdale from the denizens of north Scottsdale since...

...the last round of redistricting.

The rest of the time, north Scottsdale has as much regard for south Scottsdale as it does for Tempe, Mesa, or a pile of dog poop on the sidewalk.

And after the maps are finalized, and regardless of how the lines turn out, their attitude will return to the normal not-so-benign contempt (gee, can ya tell I live in south Scottsdale?  :) ).

Note: Scottsdale City Councilman Bob Littlefield was there and while he is from north Scottsdale, he is an exception to that observation.  Actually, among Scottsdale's "power elite", he is *the* exception.

- As mentioned earlier, most of the early part of the meeting was Republicans tag-teaming to shovel the same pile of BS.

However, later in the evening, the speakers tended toward being Independents or Democrats, all of whom supported the independence of the AIRC and competitive districts.

However, the best line of the night went to Doris Freeman -


"You think you are living in a Republican state?  You don't.  You live in a banana republic." 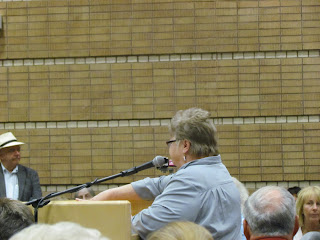 
While the video of the meeting isn't up yet, when it is it will be available here, and it's worth a view...if you need to elevate your blood pressure.

Some pics from the meeting - 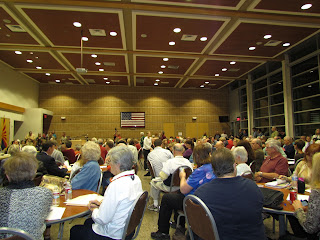 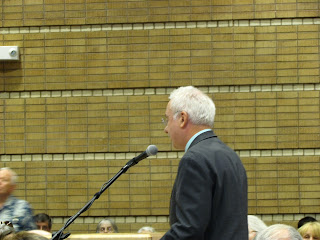 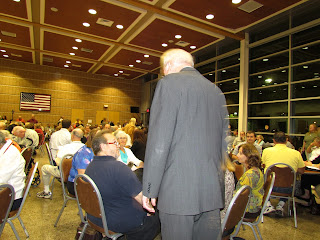 Steve Muratore of the Arizona Eagletarian (seated) and Kavanagh.  Check out the skeptical look from Muratore. 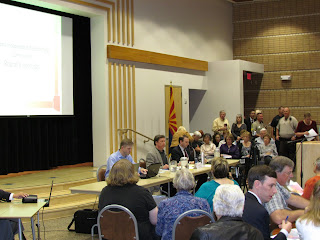 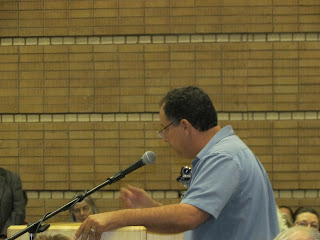