Before a packed meeting room, the Judiciary Committee of the Arizona Senate listened to well over two hours of testimony regarding SB1308 and SB1309, the anti-14th Amendment/birthright citizenship bills proposed by Sen. Ron Gould, the committee's chair.

Anybody who watched the proceedings, in person or over the internet, was treated to a mindnumbing showcase of constitutional law knowledge and ignorance.

The lead actor in that part of Monday's political theater was one John Eastman, a law schoo dean from California.  Dr. Eastman's biography boasts of his clerkship for US Supreme Court Justice Clarence Thomas.  He also regularly weighs in on things like torture, school vouchers, expansive Presidential power, and more, always supporting the "conservative" position.  In short, he was an out-of-town ringer brought in by Gould and Pearce for just this event.

Eastman droned on for well over 90 minutes, basically arguing that everyone of the "interpretations" of the 14th Amendment over the last 140+ years was wrong and that his "interpretation" was the correct one.

Sen. Kyrsten Sinema served as the main counterpoint to Eastman's misinformation, drawing on her own intelligence and legal knowledge to successfully refute Eastman's arguments.  Republican Senator Adam Driggs, a lawyer too, also pushed back against Eastman.

I'm not recounting the discussion in it entirety because it was too long and technical for me to follow closely, but friend of mine who works in the justice system was watching, described Eastman's arguments as erroneous (OK, a different word was used, but in the interests of keeping this post family-friendly... :) ).

The video of the meeting will eventually be posted on the legislature's website here (look for Senate Judiciary on 2/7/2011).

While I can't completely summarize the legal arguments between Sinema and Driggs on one side and Eastman on the other, I can list some of the better quotes of the meeting -

"I'm the 'Clarence Thomas' of this committee - I don't ask many questions" -Sen. John McComish

The proposals would "create multiple generations of children without a nation, a community" - Dana Naimark of Childrens Action Alliance

In fact, every person who testified Monday *except* for the ringer brought in by Gould and Pearce was opposed to the bills.

Just about the only tactic that Gould et. al. used today that worked was letting Eastman go on and on while keeping dissenters on a strict time limit.  By the time many of the opposing witnesses were called to the podium, they had left the meeting due to the late hour.

However, that didn't change the basic math for Gould - out of eight members of the committee, three were clearly going to vote against his measures (Democrats Sinema and Steve Gallardo, and Republican Driggs) and one was wavering (Republican McComish) leaving both dead on a 4 - 4 ties.  His "hold" of the bills allows him to both save face and allow him, Pearce, et. al. to twist some arms behind the scenes to wrangle the votes into line or even to pull the bills from that committee and assign it to one with a more pliable membership.

The quote of the day, and possibly highlighting the reason that Gould and company are so scared of immigrants, came from 12-year-old Kathleen Figueroa -

"We are the future." 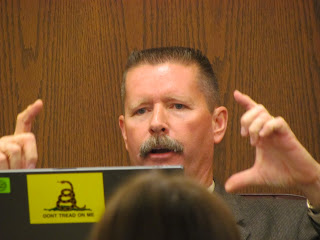 Ron Gould, and *yes* that is a tea party sticker on his state computer... 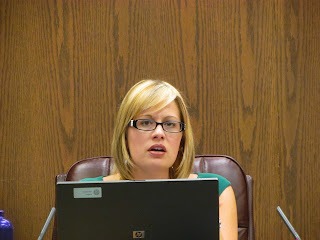 Kyrsten Sinema during the discussion 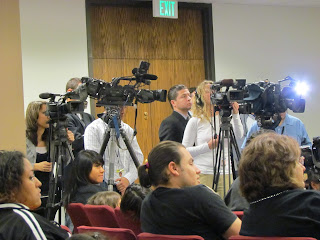 Just a few of the many media representatives watching the hearing 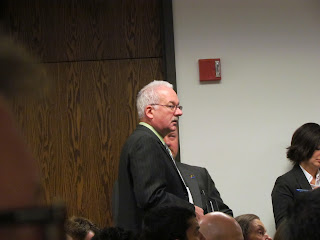 One of Gould's fellow nativists, Rep. John Kavanagh, made a personal appearance to check in on the proceedings 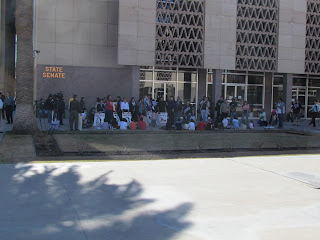 The protest outside the Senate building 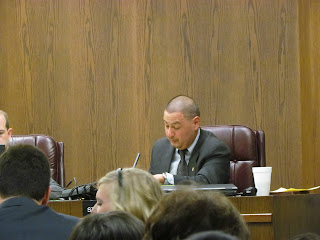 cpmaz
My name is Craig. I have lived in AZ for 18 years or so. Transplant from MA. Waiting...hoping for more to move here so the Dems can retake the Lege. Currently reading Capital in the Twenty-First Century by Thomas Piketty.. Got news tips or leads? Email them to cpmaz@yahoo.com. Note: Spam comments will be deleted.