Time for a change at the DNC...

Most grassroots Democrats, and even many Independents, are thoroughly ticked off at the White House over its recent "compromise" with the Republicans over tax cuts for the wealthiest 2% of Americans.  Most of us could have stomached the deal (with some changes), but the fact is it's just the latest example of the White House's complete lack of a backbone.

It's been a health care reform package that was so watered-down to appease Republicans and corpra-Dems in the Senate that it stopped being a "reform" package and started being a "corporate profit margin stabilization" package.

It's been dozens of issues, ones where the White House staked out one position, the Republicans staked out the opposite.  When the Rs wouldn't negotiate for the good of the American people, the White House would unilaterally move to the center. (See: replacing single-payer with a "public option" during the discussion of HCR).  And then when the Rs wouldn't talk even then, the White House would self-negotiate themselves into the position that the Rs never left (see: Changing the public option into only a mandate that Americans purchase private health insurance).

And now they don't even have that much, thanks to today's ruling by a federal judge.


As a result of the spinelessness of the White House and the leadership of the Democratic National Committee, Democrats at all levels lost races this year as many voters abandoned the Democratic Party even though the Democratic positions on most issues synch up pretty completely with the majority of Americans.

However, most voters, hell, most *people* won't support a party that they don't respect, regardless of positions on specific issues, and nobody respects spinelessness.

It's time for a change.

It's the time to make the push to return Howard Dean to the DNC chairmanship.

His "50 state strategy", implemented during his tenure as DNC chair after 2004, is widely credited as one of the reasons for the significant Democratic gains in 2006 and also as a major part of Barack Obama's success in 2008.

In every state in the country, as well as the territories, the local Democratic Party organizations are holding their biennial reorganization meetings. We need to see that each state org elects officers and National Committee representatives who will support and push for a change at the top of the DNC.

Toward that end, a website, Draft Howard Dean For DNC Chair 2011, has been put up at dean4dnc.org.  There is also a Facebook page of the same name.

Both are designed to help with organization and communication in this effort.

Right now, the effort is focused on the various state parties, which are going through their biennial reorganizations.


If you are a Democrat, lobby your local state committee members. Talk to DFA members and encourage them to do the same.  Let them know that you support electing state party officers and National Committee members who support a change.

Even if that focus is detrimental to the success of all of the other Democratic candidates on the ballot.

This is the time for a strong grassroots effort to start moving the party, and the country, forward again.

And if you aren't a Democrat, do the same things - we're all in this together.

We need everyone who cares about the future of the country and the people of America to lend their voices to this. 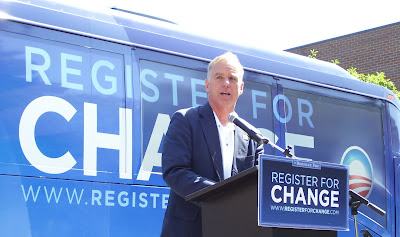 Email ThisBlogThis!Share to TwitterShare to FacebookShare to Pinterest
Labels: commentary, Dean for DNC